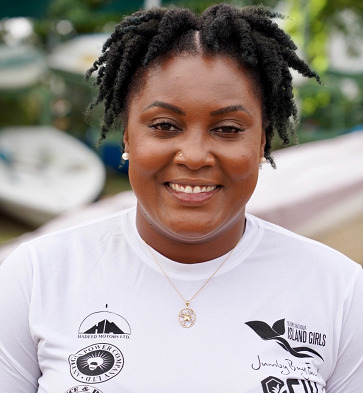 With over 15 years experience as a sailor, Samara is the first Antiguan female to become an RYA certified Yacht captain (power and sail). She holds qualifications as a Day Skipper, costal Skipper, yachtmaster, boatmaster as well others.

Samara presently has a permanent role as a Ferry captain, but still freelances as Skipper, delivery crew & race crew, logging countless solo deliveries around the Caribbean, plus a trans-Atlantic crossing from Antigua to Portsmouth.

Remarkably, she undertook another trans-Atlantic crossing from La Gomera Spain to Antigua, not under sail, but under her own physical  power – rowing with the help of some friends aptly called “Antigua Island Girls”.

Samara and 3 other women rowed into the history books by becoming the first all female team to represent our twin island state of Antigua & Barbuda, and also the Caribbean in the Talisker Whiskey Atlantic Challenge and they checked another first by having the distinction the first all black team to row across any ocean.

Samara and her team mates formed the Team Island Girls non-profit charity in 2018, pre row and have since made charitable donations to persons and institutions in need.  As a mentor in the ASW Women’s Mentorship program, Samara strives to be be the change she wishes to see by encouraging other Antiguan women of varied backgrounds to consider the industry of sailing & yachting as a viable career choice.

Keep an eye out for Samara’s next adventure, which will find her rowing across the Pacific with the Team Island Girls stating June 12, 2023.