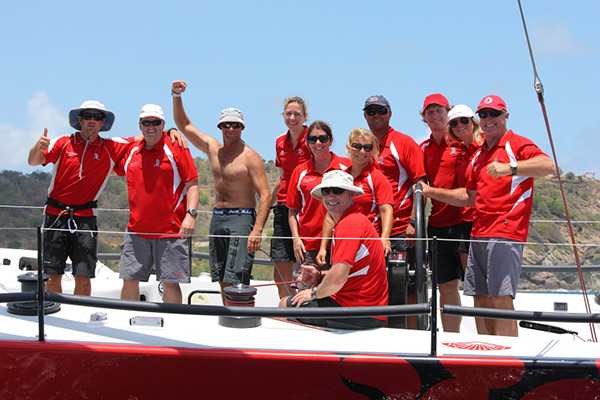 The 2014 Guadeloupe to Antigua Race

Twenty-one yachts entered the race from north of Deshaies, Guadeloupe to English Harbour, Antigua.  The ocean race of approximately 42 miles is the traditional feeder race for Antigua Sailing Week.  A warm easterly breeze of about 15 knots shifting slightly to the south with a moderate sea state produced champagne conditions for the fleet.

Rob Date, Australian RP52, Scarlet Runner crossed the finish line beneath Fort Charlotte, Antigua, taking line honours and completing the race in an elapsed time of just over three and a half hours.

“Our goal before the start was to try and get ahead of Spirit of Adventure and get home before them,” commented Rob Date. “It was a good shake out for the crew; we had a bit of a problem with our Code Zero, which we sorted out but it was all good practice. Tomorrow, we will be racing in the race around Antigua and this boat suits longer courses rather than the shorter ones, so we are keen to get out there.”

Scarlet Runner has sailed to Antigua all the way from Melbourne Australia, covering approximately 18,000 miles.  Rowan ‘Disco’ Leaper has sailed the whole way on Scarlet Runner. “I haven’t been counting the miles and this isn’t the end. We have only completed halfway; we will also be sailing back at least as far as Hawaii. This is the first time any of the crew has been to Antigua Sailing Week. We have heard heaps of good stuff about it over the years from mates who have done it before.  Friends have compared it to Hamilton Island Race Week which has similar conditions, the only big difference is that the beer’s cheaper than in Oz!”

Six Bareboats had a cracking race which was won by Max Katinov’s Cayenne. Herbert Muenzel’s KH+P Sea You Later was second with Fred Rampey’s L’oiseau des Iles in third place.

For more information go to: www.sailingweek.com